I’ve been blogging on Unitarian Universalism since 2005. My blog got hacked in late 2010, forcing me to set up a new blog at a new URL. Eventually, I restored the old blog, so now my blog is at two different URLs:

My blogs have thousands of posts by now. If you’re looking for a specific topic, try the search functions at both blogs (the index was only maintained through 2015). If you just want to sample some representative posts, here’s a selection of some popular posts over the years, ranging from reportage to history to spiritual matters:

If you start exploring my blogs, please remember there are lots of mediocre and even outright bad posts. There are also posts with which I now disagree. Consider my blog an example of how people can grow and change (and hopefully improve) over time.

My blog over the years

Below is a screenshot showing how my blog looked in 2005, when it was still hosted on America OnLine (AOL) 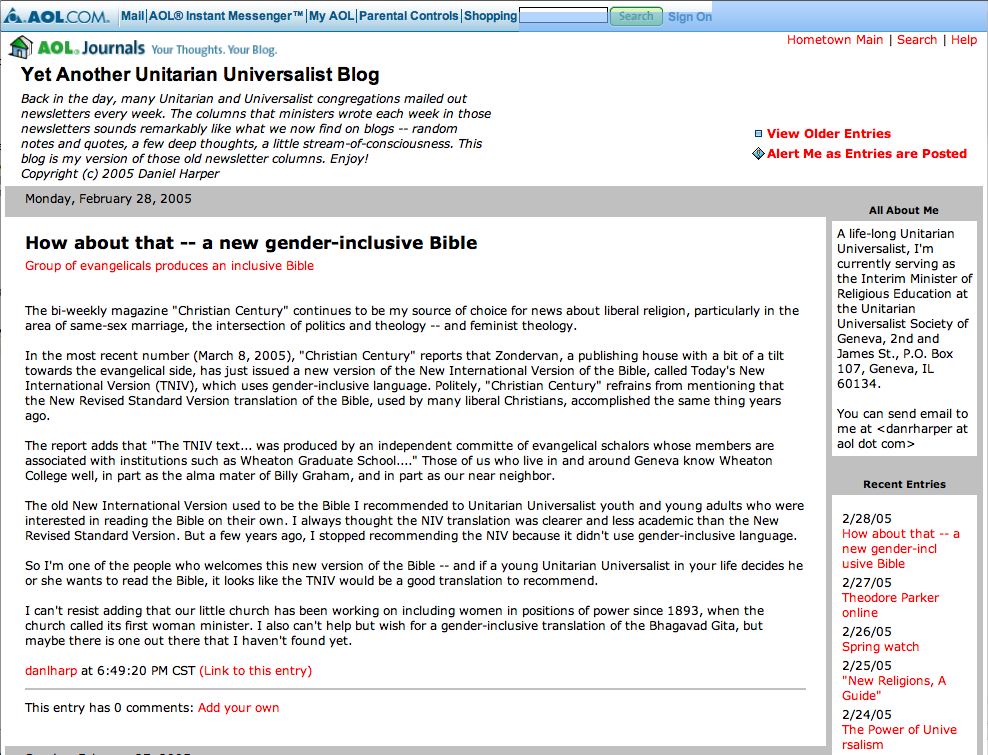 Screenshot from 2009, my custom adaptation of the old “Kubrick” default Wordpress blog template. I moved from AOL to Wordpress in November, 2005. I never liked the “Kubrick” template, and first used a modification of the original Wordpress template; when that got too creaky, I modified “Kubrick” into the design you see here. By 2010, I was getting 50,000 unique visitors a month to my blog. 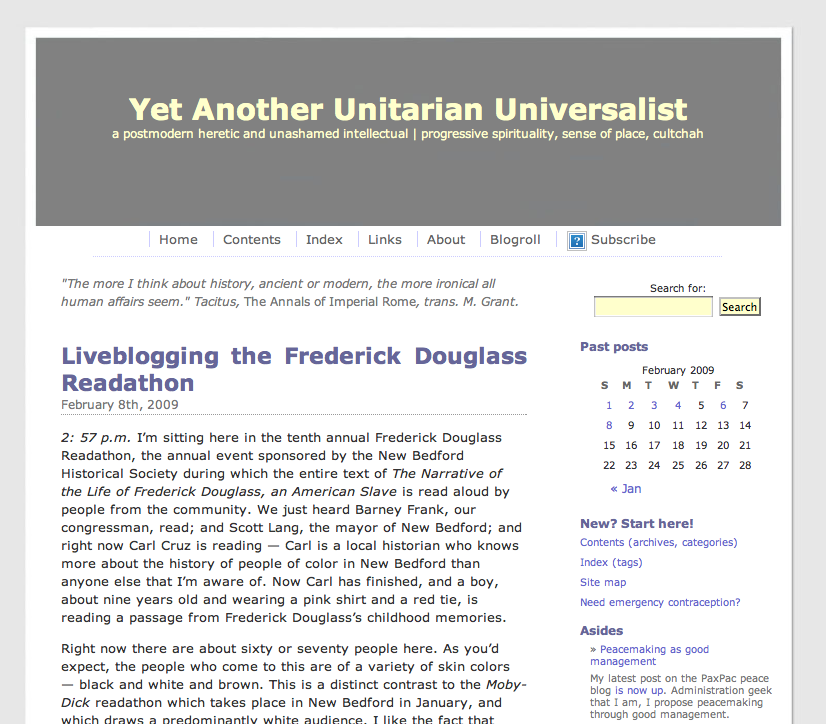 Screenshot from 2012. I dropped my custom theme design in favor of a Wordpress responsive theme. As more and more people moved to social media platforms like Facebook, I started focusing more and more on long-form posts; I posted less frequently, but I think my average monthly word count didn’t drop much, if at all. 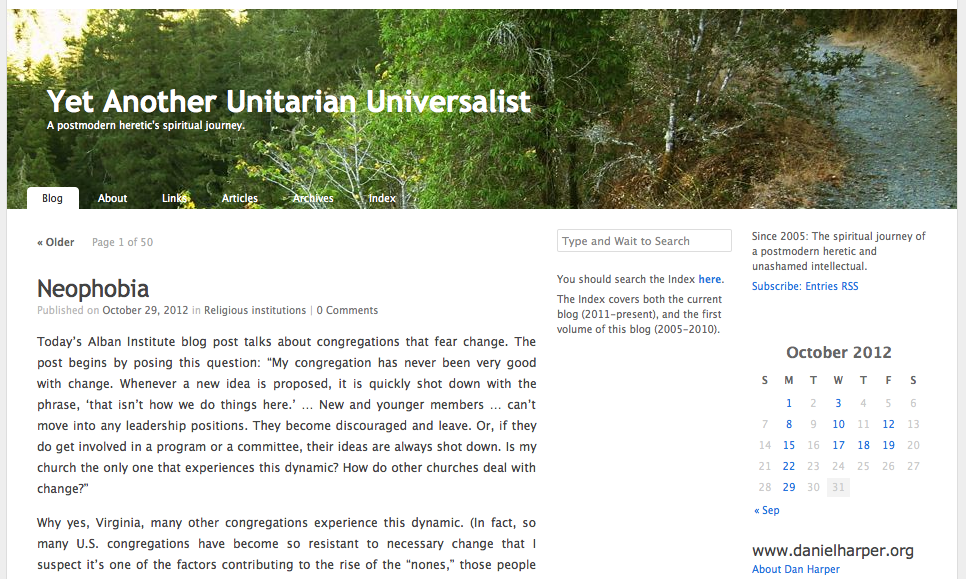 Screenshot from 2017. I switched to the present theme c. 2017. I used to talk with my father a lot about the things I posted on my blog. When he was no longer able to talk I cut back on my blogging, and after his death I cut back even more — in this screenshot, you can see how few posts I wrote in December, 2018. 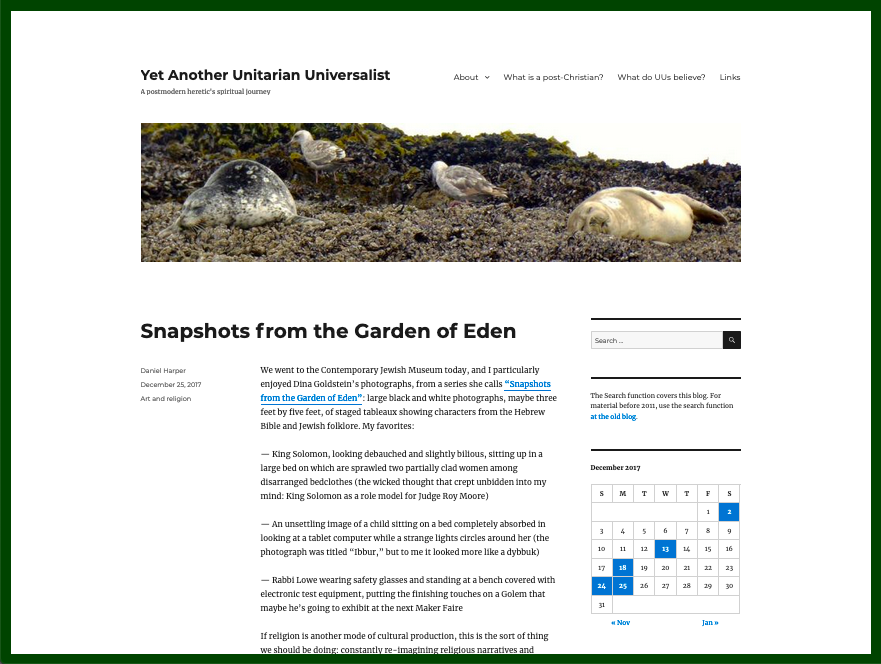 Screenshot from 2021. Still using the same old theme. Still focusing on long-fomr blog posts. While I haven’t had a big commenter community for a number of years now — that kind of interaction now takes place on social media platforms — my experience shows that a blog with lots of well-written, well-researched posts results in excellent SEO ranking, with lots of high-quality incoming links. 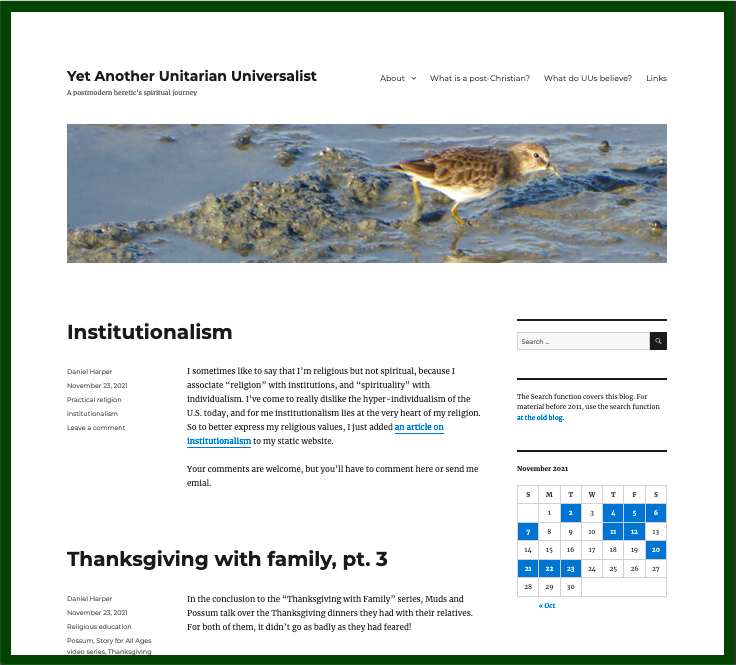